The sun was definitely not shining at Langland Bay GC for the County Away match v Glamorgan. The weather conditions included torrential rain showers and high winds! The C & P Team were :-

Following much discussion and given limited remaining time to re-arrange the fixture it was decided to invoke the C & P match rules and play the singles rubbers first to endeavour to reach a result before further bad weather set in.

Ffion Evans led the singles out against Rachel Jennings (Pennard) and secured a much needed win on the 17thgreen. The weather had worsened during the matches which made conditions difficult for both sides. Sophie Anderson lost to Charlotte Bethall (Radyr) on the 16th  while Kasumi Tran came back from an early significant deficit to only narrowly lose on 17th green to experienced Julie Thomas (Pontardawe & Porthcawl). Elin Jones was an the losing end of an in form Amy Rees (Southerndown) and Alice Thomas ( Radyr) secured her win against Sharon Roberts on 17th . The 17th was again the site of the final Glamorgan win with Fauve Birch (Pennard) narrowly overcoming Olwen Davies.  With 4 of the rubbers ending on 17th green it was a close run outcome but with the result of 5-1 securing the match win for Glamorgan and the weather conditions forecast to worsen it was agreed not to proceed with the afternoon foursomes. The team enjoyed Glamorgan’s hospitality in the clubhouse after drying out!

A massive thank you to all the team for their commitment and resilience including Judith and Janet who supported the team around the course in the morning rain and wind. The team performed admirably and despite the conditions the golf was truly first class.  Thanks to president Christine, selectors and supporters. Looking forward to next year’s matches. 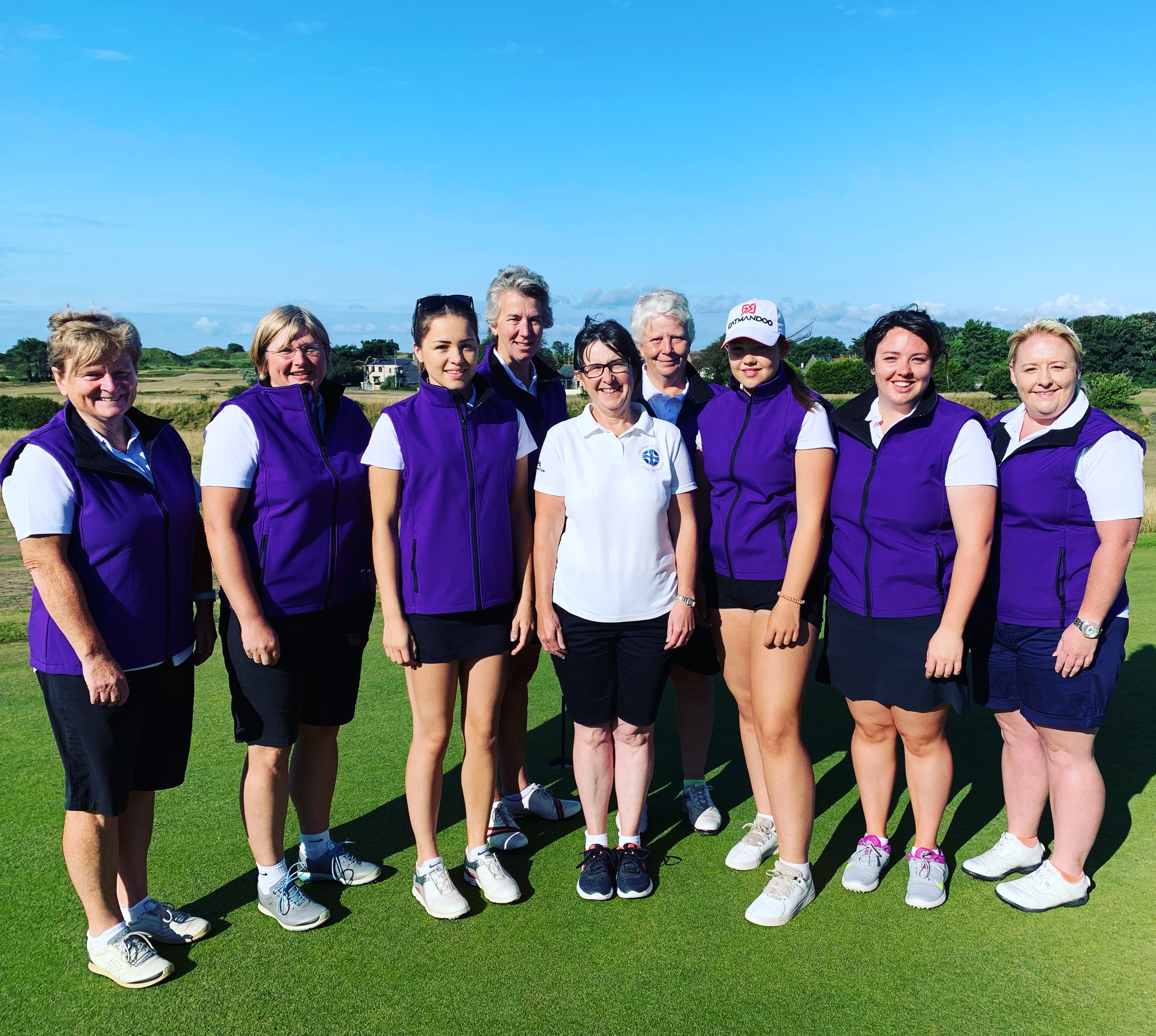 After a quick photo shoot it was off to the tee with our President Christine starting them off with words of encouragement.
Nia and Ffion led out the morning foursomes against the Monmouthshire pairing of Lauren Hillier and Caroline Cole. Despite making a strong comeback from 4 down they narrowly lost on 18th green. Our second pairing of Sophie and Olwen with their local knowledge and excellent golf got the better of Jordan Ryan and Ffion Vineall securing a 2&1 win. Elspeth Owen and 14 year old Holly Watkins(making her debut for the first team) made another courageous recovery from 4 down to secure a well earned half.
It was honours even at lunchtime and following some light refreshments the girls set out in the afternoon singles with everything to play for. Janet Jones our County Champion led the side out versus the experienced international Lauren Hillier. Janet  played excellent golf with the support of her caddie Jud before eventually losing within site of the clubhouse at the 15th hole. The middle order came through strongly for C&P with Nia imposing an emphatic 7/6 win over Sophie Masden , Sophie beating Megan Vineall 2/1 and Ffion turning around her morning foursomes defeat by Caroline Cole to secure a 4/3 win over her in the singles. Jordan Ryan played birdie golf to secure a win over Olwen. This left the afternoon in the balance with Elspeth Owen in the final match v Emma Miller. The Monmouthshire player despite finding trouble on several holes managed to get up and down through some superb one putts on the greens. Elspeth with the support of her caddie and teammate Nikki fought back from 3 down to win consecutive holes to get back in touch. The rain had started to come in however this didn’t dampen the excitement of the match with Emma eventually sealing her point for Monmouthshire on 16th green.
With the morning foursomes and afternoon singles halved the match ended honours even.

The team gave their all and showed their determination to ensure a well fought draw. 👏 A big thanks to the team for their commitment. The matches were played in great spirit and the teams enjoyed a convivial meal afterwards. Thanks to President Christine, selectors, supporters, the catering team and to Ashburnham for hosting the event.

So it’s eastward to Langland Bay G.C. on 14th August for our match with Glamorganshire. 🍀
All support welcome 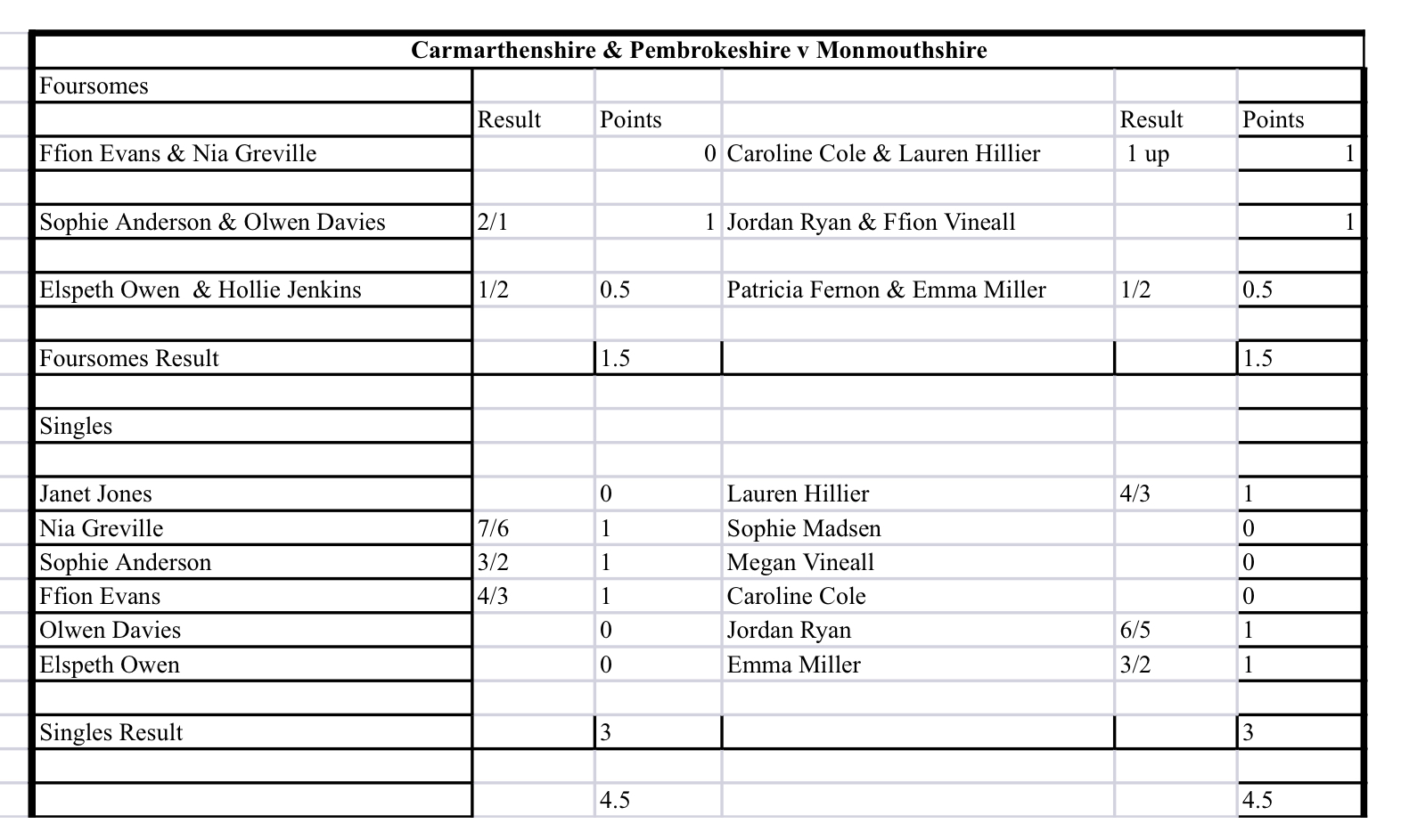 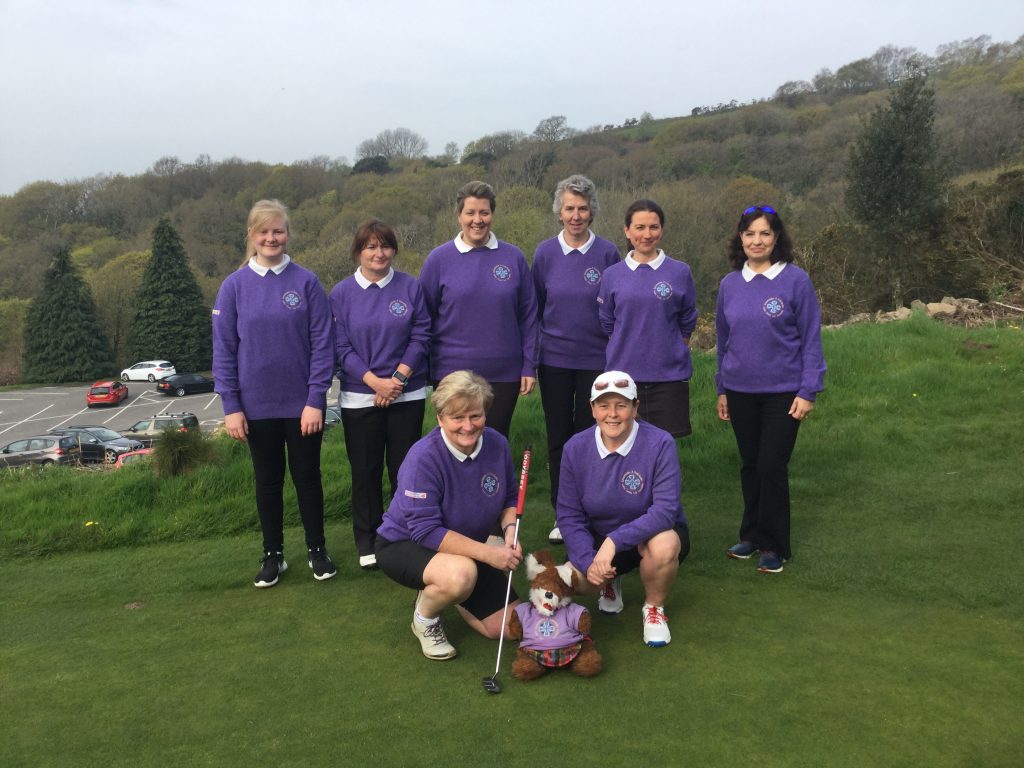 Our second team came up against a strong Glamorganshire side who were out to reverse last year’s defeat by C&P. This year, Glamorganshire chose a different format – instead of 8 singles the match comprised of 3 morning foursomes and 6 afternoon singles.

The match was played for the most part in glorious sunshine if a little windy at times! Although the overall defeat 8-1 was not what we would have hoped for, Elin Jones ensured it was not a whitewash with her excellent win over Wendy Edwards. There were some close run matches with Rhian Walters and Jud Stevens narrowly losing the morning foursomes on the 18th green and Jud on the losing end of a closely fought singles match ending on 18th in the afternoon.

The greens were extremely fast and there was some great golf played with the girls battling hard with birdies and an eagle to keep the matches live.

It was great to see another C&P junior Marni playing composed and competent golf to take her Glamorganshire opponent to the 16th.

Well done to all the ladies who played against a very strong Monmouthshire team at the Rolls of Monmouth. The conditions were extremely hot & humid during the practice round but fortunately competition day was slightly cooler. We lost two matches and halved one of the morning foursomes so we were trailing at lunchtime. The ladies came out fighting in the afternoon and played some amazing golf and at one stage it looked as if we were going to at least get a draw. We did really well to match them in the singles 3-3 with some very impressive individual performances but with the overall result being a 5.5 to 3.5 loss it means that this year sadly we will not make the final in September.

Huge thanks to all the players for their time and commitment & to Celia Bartlett and Cath Jones who supported us throughout.

at The Rolls of Monmouth

I’m pleased to announce the following squad for this match

We narrowly lost this match to Glamorganshire 5.5 to 3.5

The team selected to play in the above match is:

This was a truly remarkable win for our county against a strong Glamorgan side. The match was played at Derllys Court on Thursday 12th April 2018 in lovely weather conditions. The team got off to a great start and most players were leading after 9 holes. Whilst Kasumi, Denise, Elin & Jud went on to win comfortably the other four matches were a much closer affair. Lucy did well to get a half against their strongest player and Cath Jones fought back admirably to win the last 2 holes to get her half. Hollie, also winning on the last hole, looked so comfortable and competent that you would never believe that she is only 13 years of age. Kathy did so well to hold her nerve in the final match winning on the last hole with all the supporters and players watching.

There was some outstanding golf played and we are fortunate that we are now beginning to have this strength in depth. The young girls (Kasumi & Hollie) both playing their first match for the ladies are a real asset to the team. We now look forward to playing the Glamorganshire 1st team in Haverfordwest on Saturday June 2nd.

We narrowly lost the year before last at Fairwood Park so we look forward to this return match and are very grateful to Rhian for allowing us to host it at Derllys Court.

@cplcga wishing all our members and affiliated clu

Pob Lwc / Good Luck to the Semi Finalists of the S

Pob Lwc / Good Luck to the Semi Finalists of the C

Good Luck tomorrow to the Semi-Finalists in the @c

Big thank you to all the parents for bringing thei

Pob Lwc / Good Luck to @cplcga in the Ping Junior

Wishing all our @CPLCGA members and affiliated clubs Merry Christmas/ Nadolig Llawen. See you in 2022 ⛳️

Good Luck to the Finalists Ffion Evans @NewportLinks and Nicky Reeves @HaverfordwestGC in the Final of the County Championships at Newport Links.

This website uses cookies to improve your experience while you navigate through the website. Out of these cookies, the cookies that are categorized as necessary are stored on your browser as they are essential for the working of basic functionalities of the website. We also use third-party cookies that help us analyze and understand how you use this website. These cookies will be stored in your browser only with your consent. You also have the option to opt-out of these cookies. But opting out of some of these cookies may have an effect on your browsing experience.
Necessary Always Enabled
Necessary cookies are absolutely essential for the website to function properly. This category only includes cookies that ensures basic functionalities and security features of the website. These cookies do not store any personal information.
Non-necessary
Any cookies that may not be particularly necessary for the website to function and is used specifically to collect user personal data via analytics, ads, other embedded contents are termed as non-necessary cookies. It is mandatory to procure user consent prior to running these cookies on your website.
SAVE & ACCEPT